A Sense of Community 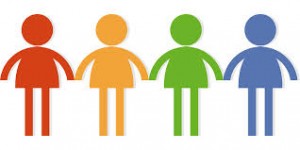 I was asked by a coworker, why I blog.  He asked, “Why would you spend the time writing, when people have official documentation to use?”  His point was that it’s silly to write how-to articles about things that are already officially documented by a vendor.  To further his curiosity, he wanted to know why I would post things that could possibly get me into trouble if I’m posting negative things or incorrect information.

He had a point, but my answer is this: I’ve been helped by so many people, reading their work, talking to them in person, or conversing via twitter, and I feel an obligation to help others do the same thing.  Official documentation is sometimes confusing and often leaves out pieces of information that may make the solution seem poor.  For instance, a bug in the software is rarely mentioned in the official documentation by a vendor.  A software vendor wouldn’t want to make their product seem less impressive, after all it’s their job to sell software.

This week, I was particularly in the weeds with a project and had several challenges deploying a solution based on the official documentation alone.  This was a complex solution that required many moving pieces to fit together correctly and I was stuck.  On two occasions I ended up reaching out to bloggers and people I knew in the industry for a push in the right direction.

Based on a blog post I’d read on virtualizationteam.com I was working through a problem and needed a hand.  Luckily the author, Eiad Al-Aqqad, had contact information on his site and I sent him a quick email.  Within an hour I had a response and got me moving again.  It was a simple question, and a simple answer, but was a cricital piece of what I was working on and it helped immensely.  I should also mention that I’ve never met Eiad Al-Aqqad before, so him taking a second to answer a question of a complete stranger is really som 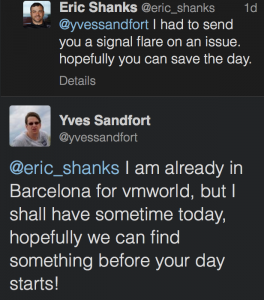 Later in the week, I was stuck on a different issue on the same solution we were deploying.  At the end of a hard day I decided to again ask for help and I knew someone who would know the answer.  Via Twitter I sent up a call for help from Yves Sandfort.

As you can see, Yves was in Europe and at a tech conference, but took a second to respond to my tweet and later on, my more lengthy email.  Sure enough, the following morning when I got up, he had responded to my email and I was again on my way after he confirmed my suspicions about what was happening.

I’ve never been part of such a large group of people with similar interests that are so willing to help each other regardless of whether or not they get compensated.  I’d like to thank all of the resources I’ve used in the past and I hope someone has gotten something out of my posts as well.