Setting up a DHCP relay is a pretty common task that performed by network administrators when setting up a new LAN.  If you’re not familiar with a DHCP Relay, take a look at the example below. 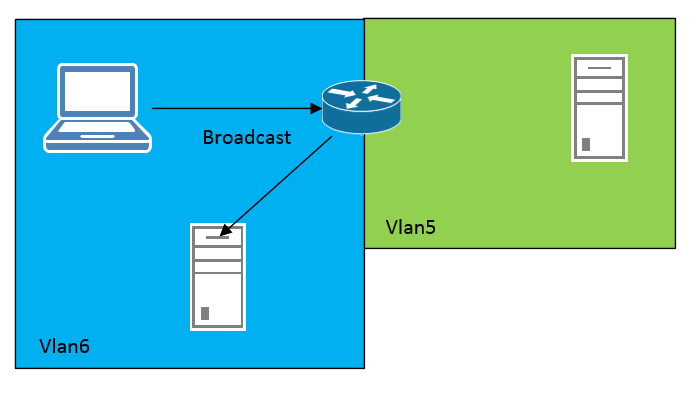 Now assume that you have  DHCP server setup, but it’s on a different network.  What happens then?  Broadcasts don’t traverse the local network so how is this accomplished?  The answer is that a DHCP relay agent is used on an appliance on the clients LAN that can pass that traffic to the DHCP server.  Usually this relay agent is a Layer 3 Switch or Router since it has access to both networks.

The broadcast still happens from the client and then the relay agent forwards a unicast frame to the DHCP server on behalf of the client.

To set this up on an HP v1910-24G switch like the one in my home lab we can do the following.   In the Menu, go to the Network Section –> DHCP.  From here we first enable the DHCP Service.  This doesn’t mean that the switch will start handing out IP Addresses, it just starts the service.

Next, take a look at the Interfaces and their Relay State.  My Clients are on VLAN170 and my DHCP server is on VLAN 150.  Notice that I only had to enable the DHCP Relay State on the Vlan170, where the clients live.  Click the [looks like email] icon in the “Operation” column to enable this.

We we enable the DHCP Relay.  You can add the “Address Match Check” as well, but beware.  If any of your clients on this network don’t match a DHCP lease, they won’t be able to communicate.  Meaning that even if you set a static IP Address on your client, the switch won’t respond to it because there is not matching address.  Also enter a server group ID.  This ID should match the server group that was added when adding the DHCP Server IP Address earlier.

Next, go to the DHCP Snooping screen to “trust” the physical interfaces that might have a DHCP Server on them.  Notice that I have multiple physical ports trusted, because my DHCP Server might vMotion between ports on different hosts since it’s a virtual machine.  Don’t forget to add all of them or you’ll have a fun time hunting down issues.  Again, click the icon in the operations column to configure the port.

Change the interface state to “trust” and click Apply.  Your clients should now be able to request IP Addresses from your DHCP Server.

Zerto 4 – To Amazon and Beyond