If you’re brand new to Ansible but have some vRealize Automation and Orchestration experience, this post will get you started with a configuration management tool.

To get started, we need Ansible setup. So I deployed a CentOS server and performed my necessary environment configurations like IP Addressing, adding SSH, disabling my firewall (uh, yeah its a lab). Next I SSH into the ansible server and run the following two commands.

To use ansible, we need to create an inventory of the servers that the Ansible server should be going out execute commands on. Create a file called inventory and if you want to run a test, add a DNS name or IP address of a machine to configure Apache on.

Now we need to create a playbook. I’ve named a file playbook1.yml. This file will be the desired configuration state of the machines listed in inventory. The exact code that I used is listed below. Even without knowing anything about Ansible code, you can probably guess that its going to ensure the machine will install httpd via yum and then copy some files of mine from hollowweb directory over to the html directory and lastly start the httpd service.

When you’re done, your directory should have an inventory file, and playbook1.yml file. My example also has a hollowweb directory which is where I’m storing my web server files in my vSphere templates. Your actual web server files could reside in GIT, Artifactory or a file share.

If you want to test out your configuration now, simple run the following command on your Ansible server.

The server listed in inventory should install your apache server and run all the commands listed earlier.

NOTE: Ansible is agentless and requires SSH access to the guest machines. This may mean that you need to setup your SSH keys and knownhosts files to allow the communication. We won’t want to have to put in passwords or anything when we start to automate the process.

Now, all we’re going to do is add a vRO workflow that will add machines to inventory and execute the playbook commands that we did earlier. I added a workflow that formats a command, and then passes that command over to a workflow that executes it on my Ansible server.

The script formatting is shown below, you can see in this one, I’m going to add an IP address to the inventory file.

Now a second workflow to again, format a script and pass it to the Ansible server to run via SSH. This time the script runs the Ansible playbook. The script I used is below.

Lastly, create a third script (well, that’s what happens when you build modular scripts to be reused). This script will gather the variables passed over from vRA, and then execute the two workflows we build above.

We’ll assume for now that you can publish a new server in the catalog and have setup event subscriptions so vRO workflows can be executed during provisioning. Point the MachineProvisioned Event subscription to the third workflow we built above. 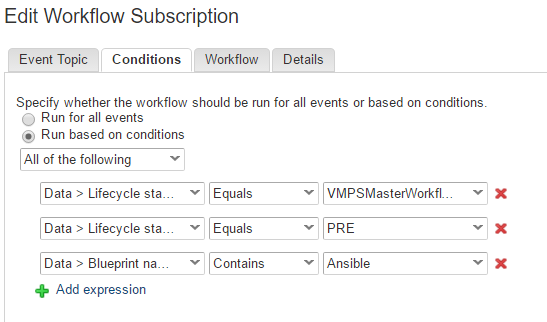 Request your blueprint! With any luck you’ll have your webpage displayed on your newly provisioned machine.

If you want to dive deeper into Ansible and figure out what else you can do with it, please check out the Ansible guides.

I’d love to hear what kind of things you created with your own Ansible instances. Post them in the comments!

Determine the Number of vSphere Clusters to Use