If you’ve built a virtual infrastructure you’ve probably had to decide whether or not to use Beacon Probing when setting up your vSwitch uplink ports. But what is it, and why do we need it?

Let me propose a scenario. Assume that we have a virtual switch with three uplinks, and one of those uplinks fails. 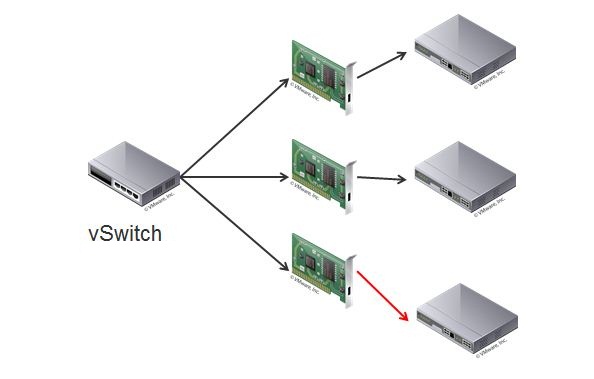 If the uplinks are setup correctly, they will see the failed uplink and start sending their frames over the other active uplinks. This is standard network fault tolerance from vSphere.

But what happens if the link failure happens further upstream like between an access switch and the core switch? 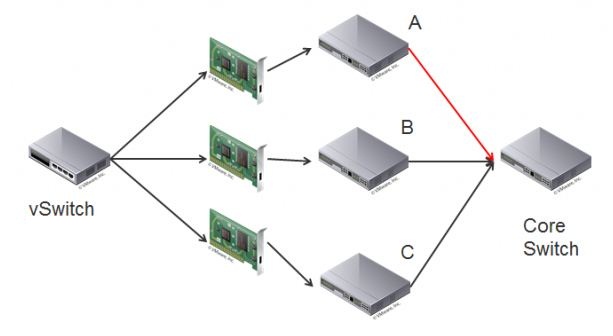 Under normal circumstances the ESXi uplink will still show a connection and route frames to physical switch (A), even though this physical switch’s upstream switch link is down. This situation could be just as bad as having an uplink down on the ESXi host, but the ESXi server is unaware of the link failure.

Depending on how your network is setup, you could be using Link-State Tracking on your access switches which means that if the link between switch A and your core switch is down, it will put all of the downstream ports into an error state. If this is the case, the ESXi server will be able to determine that there is a failure and to use the other uplink ports.
However, if your network isn’t using Link-State Tracking and you are in a situation where an upstream switch could cause a failure, it might be a good idea to use beacon probing.

Beacon probing is a software alternative provided by VMware vSphere, to detect uplink failures. During the Beacon Probing process the ESXi host periodically sends out a broadcast packet which vSphere expects will be forwarded by all of the physical switches. The ESXi server then listens on all of the other NICs in the team to hear that broadcast frame. If the other NICs don’t hear three consecutive broadcasts then ESXi will mark the Nic with the problem path as failed. 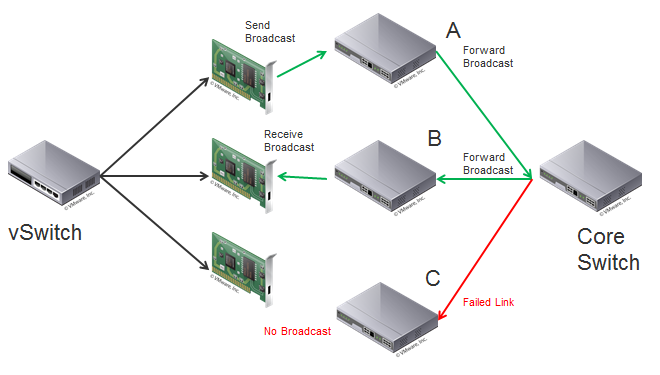 This document was created using the official VMware icon and diagram library.
Copyright © 2010 VMware, Inc. All rights reserved. This product is protected by U.S. and
international copyright and intellectual property laws. VMware products are
covered by one or more patents listed at http://www.vmware.com/go/patents.
VMware does not endorse or make any representations about third party information
included in this document, nor does the inclusion of any VMware icon or diagram
in this document imply such an endorsement.