When I saw the Virtual SAN solution from VMware my first thought was that a small office might really love this solution because it eliminated the requirement for a Storage Area Network (SAN) for small offices.  Often I would see some small remote offices that have a requirement for a few servers and a bit of highly available storage but this was cost prohibitive for a variety of reasons.  Remote offices would need power, cooling and some sort of staff (possibly remote staff) to manage all of these services as well as paying for a shared storage device.  Remote office SAN’s are typically a waste since some of these offices really have a very minimal storage footprint, such as less than 5 TB of disk space.  It would seem like a waste to by a highly available SAN to house 2TB of data, am I right?

When I saw StorMagic at Storage Field Day 6, I realized that they saw the same thing that I did, except they saw an opportunity that Virtual SAN doesn’t have.  Virtual SAN is too expensive for some of these companies because it requires three servers just for high availability and also requires a combination of SSD and HDDs.  StorMagic’s strategy is all about targeting these “Edge” locations with bare-bones simple methodology to limit cost for these sites.  They used the term “Edge Sites” over Remote Offices because “Remote Office” give you the illusion that there is an actual office involved with a certain number of employees.  When they say “Edge” they could be talking about a phone closet in a remote location that is used for monitoring something such as a wind farm.  StorMagic attempted to limit costs by only requiring two nodes.  This could be a large cost savings if you are comparing VSAN and StorMagic because of the elimination of one-third of the necessary servers.  Take that multiplied by a large number of sites, and the cost savings would definitely be noticeable.

All travel expenses and incidentals were paid for by Gestalt IT to attend Storage Field Day 6. This was the only compensation given.

StorMagic uses a pair of  iSCSI virtual SAN appliances (VSA) that work with two nodes to provide the High Availability.  The VSA runs on multiple hypervisors allowing for a lot of customer choice and isn’t concerned with the types of underlying hardware including the disk speeds.  You could use two different vendors for server hardware and SSDs on one server and HDDs on another server.  (I’m not saying you should do this, but rather pointing out that it’s possible.)  Both of the VSAs are active, so clients can connect to either of the VSAs to retrieve data.  In order to prevent a split-brain scenario like in the event of a host isolation event, a quorum service is used as sort of a heartbeat to determine who has the most up to data copy of the data.

Data is written directly to the VSA via the iSCSI connection and then synchronous Mirrored to the additional VSA before the transaction is committed.  This is to ensure that the failure of a single host doesn’t stop all of the data from being lost.  If this were to happen a third party High Availability state could be used to power on servers on the other host, i.e VMware’s High Availability will power VMs up on the available node and all the data will be available.

There is a plugin available for vCenter to manage all of the deployment of the StorMagic VSA, but also a standalone management interface to allow you to use the free ESXi version to run the VSAs.  Another option to allow you to run your edge offices cheaply. 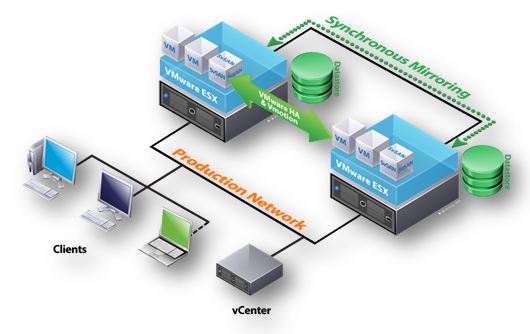 These aren’t exact numbers and your mileage may vary, but a general rule of thumb is that the product is $500 per TB up to 16TB and anything above 16TB is considered “unlimied” which is a flat rate of around $10,000.  You have to admit, that for a small remote office (or Edge) this is priced very well for companies to deploy many offices for a pretty low price point.

This is a niche storage solution that could be very useful to companies looking for some High Availability at edge sites and aren’t concerned about fancy bells and whistles.  This product has a limited function by design and if utilized properly, could save a lot of money in the right instances.  Check them out if you’re looking for an edge solution for your virtual environment.

CategoryRecently Added SFD6
Have VSAN? Want to run NFS on it? Check out Nexenta!
It's not just PURE Storage