We love Amazon EC2 instances because of how easy they are to deploy and we have a huge catalog of templates (AMIs) to choose from which really speeds up our provisioning. But once those instances are up and running it would be really nice to have some methods of managing those instances. Luckily, Amazon has developed several capabilities to help manage Amazon EC2 instances after they’ve been deployed. These capabilities are used to execute scripts, manage patches and kick off automation routines within an EC2 instance, directly from the AWS console.

The first thing to know is that not all instances deployed through AWS are considered managed instances. To be used with the EC2 Systems Manager capabilities, instances must have an SSM Agent installed on them. Out of the box, a Windows Server 2003-2012 R2 AMI published in November 2016 or later will automatically have the SSM Agent installed on them. If you have an EC2 instance deployed through an Amazon AMI published before this date you should update the instance with the latest agent or redeploy from a more recent AMI. For Linux instances, the SSM Agent is not installed by default. You must install the SSM Agent on a Linux instance before any of the cool toys can be used with them. Luckily for us this is pretty simple for deploying new instances.

During the deployment of a Linux instance, under the Advanced Details, some user data can be added so that the agent is downloaded and installed upon initial provisioning. The example below is the user data that I used to deploy a CentOS instance on Amazon EC2. The commands for your favorite flavor of Linux can be found on the Amazon documentation page: http://docs.aws.amazon.com/systems-manager/latest/userguide/ssm-agent.html#sysman-install-ssm-agent

The SSM Agent will need to be able to communicate back to the EC2 Systems Manager service which means that it requires outbound Internet access. The agent will check in with the service so outbound access is required while inbound access is not.

As with most Amazon Web Services solutions, they are not available across all regions. EC2 Systems Manager is no exception. For a full list of regions please visit: http://docs.aws.amazon.com/general/latest/gr/rande.html#ssm_region

Before we start using the services we’ll want to have our permissions and roles ready to go. First, your login must have permissions to access the Amazon Systems Manager console. If you’re an administrator for the VPC in which the EC2 instances will live, then you already have sufficient permissions. If not, you’ll want to assign your user account the AmazonSSMFullAccess policy to the account.

Give the role a name and pay attention to what it is. We’ll use the name again later when spinning up our instances. Click Create Role.

If we want to log our commands executed through Systems Manager, we can use CloudWatch Events as well. This is an optional setup task but useful for enterprise deployments. To get started go to the CloudWatch service and create a new rule under Events. In the service name select the EC2 Simple Systems Manager (SSM) and then under type select which event type you want to alert on. I selected just Run Command but you can pick whatever you’d like. In the Targets section I have selected a Simple Notification Services topic named “NotifyMe” which I setup previously. 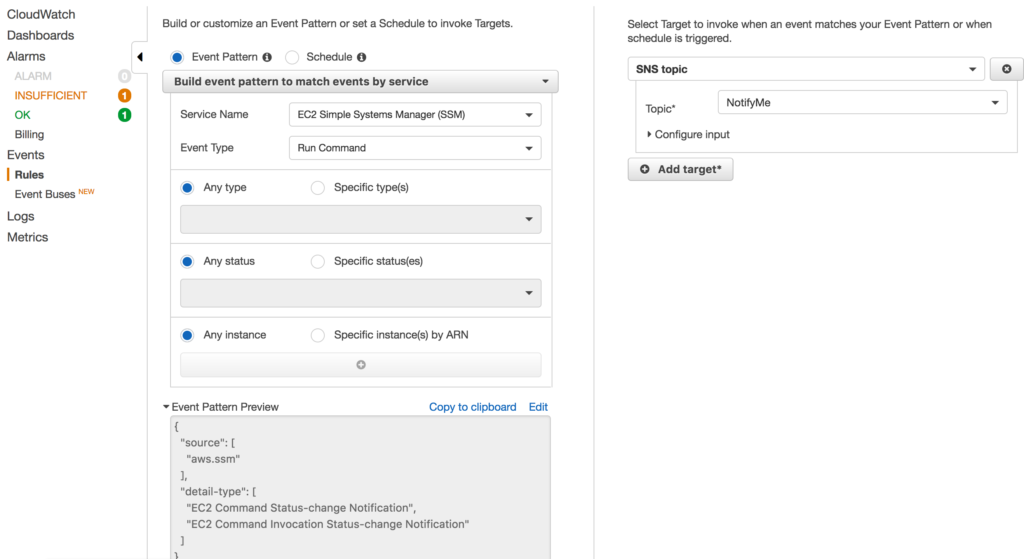 We’ve got things ready to go but we’ll need some test instances to manage. Go to the EC2 instances page and select a supported server type from the list. I’ll choose the Amazon Linux AMI for this example. We’ll want to do the standard things for deploying an EC2 instance such as selecting a family and a type. The important steps for working with EC2 Systems Manager are configuring the instance details. On the “Configure Instance” page change the IAM role to the role that we created in the section above. In my case it’s EC2SystemsManagerRole. 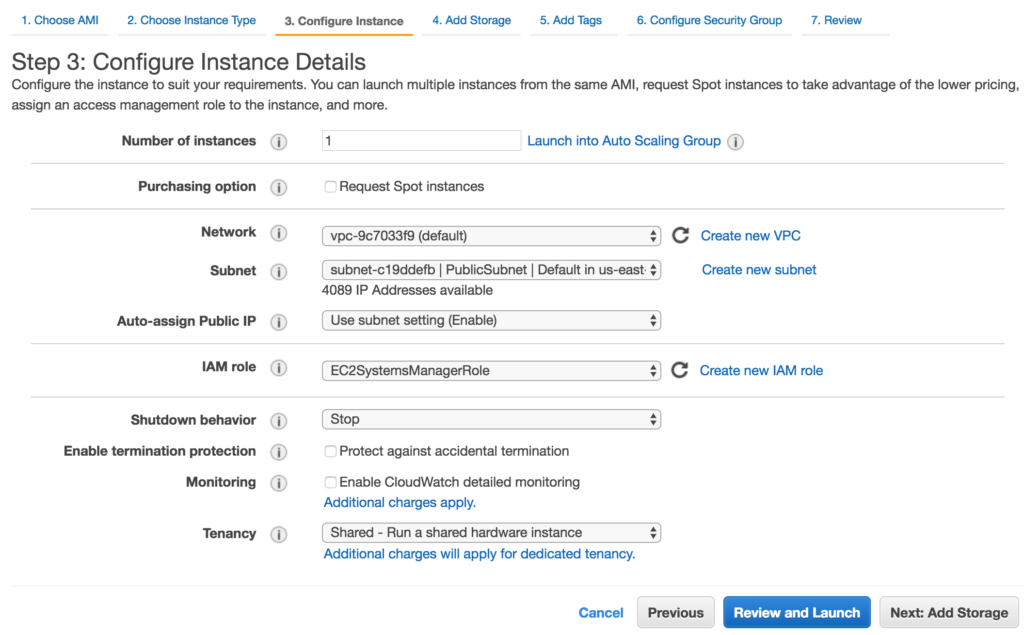 Then further down enter our user data to perform the installation of the SSM Agent during provisioning.

Complete the EC2 deployment with your own settings for networks, tagging, storage and all the other properties that make sense in your environment.

We haven’t gotten to see the power of the EC2 Systems Manager services yet, but we have a good foundation ready to go and in the next posts we can start playing with the services. To read more about the real power of EC2 Systems Manager, check out the links below.